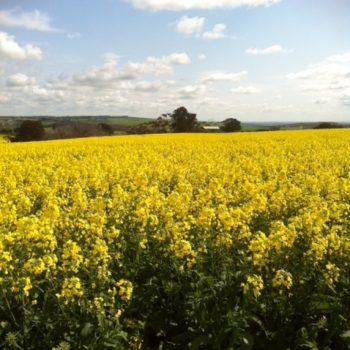 The Barrabool Hills were part of the tribal territories of the Wathaurong people.

Ceres was first settled by squatters in the late 1830s and the lots of the Barrabool Parish were advertised in 1839 with the land being sold on February 5th, 1840. There was considerable competition for the Barrabool Hills land and the area became part of Roslin, owned by David Fisher. As the government had not made provision for a settlement in the Barrabool Parish, Fisher after selling much of his estate in 1846, advertised in March 1850 a section for sale. This was to be the new village of Ceres, named after the Roman goddess of agriculture.

Ownership of the land encouraged the planting of longer term crops such as grape vines and the area was the main source of wine grapes in Victoria until phylloxera decimated the vines in 1880.

The first business, opened in March 1850 was the Wheatsheaf Inn, which became the social hub for the community. In 1856, the village was reported to have the Seidel Brothers Vineyard, (believed to be the first vineyard in Victoria) a blacksmith, 2 forges and a quarrier, a physician, a store, a shoemaker, a post office, a butcher, a surgeon and two hotels.

With the discovery of gold in Victoria, the farming community of Ceres benefitted enormously as hordes of people travelled through Geelong to the goldfields. After the goldrush, Geelong’s population increased dramatically and as a result Ceres boomed, becoming the ‘food bowl’ of Geelong.