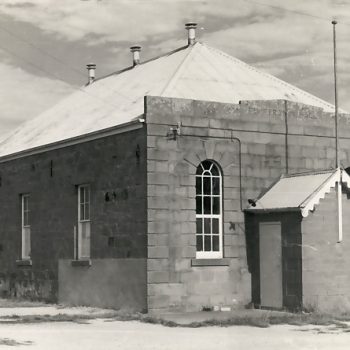 The Temperance Hall in Ceres was erected in 1862 for the Barrabool Hills Total Abstinence Society. Design and construction of the building is attributed to Nicholas McCann, a foundation member and first President of the society. He also was the donor of the land on which the hall is located.

The Barrabool Hills Total Abstinence Society was formed in 1861 in response to the perceived intemperance of the district. It was an area renowned for prolific vineyards and hotels.

The substantial sandstone hall with its entry porch and steep pitched roof designed in a primitive Georgian style was built to encourage sobriety.
The Temperance Hall was acquired by the Blue Ribbon Society in 1883 and the original shingle roof was replaced with corrugated iron. In 2013, the hall was purchased by the City of Greater Geelong for $1. After considerable refurbishment the hall has been managed by the Ceres Community Association since 2015.